AgGeorgia Farm Credit has donated the final $10,000 needed to rebuild “The Big Peanut” monument that was destroyed by Hurricane Michael in 2018.  This donation, along with funds from the Ashburn Turner County Chamber of Commerce, the Turner County Young Farmers and the Georgia Department of Agriculture, will ensure that the monument is restored to its prominent location along Interstate 75.

“The Big Peanut Monument is a tribute to all of South Georgia’s farmers and agricultural industries that are the backbone of our economy. We are proud that Turner County is home to this testament and we are working hard to get it back up, repaired and restored in all its former glory,” said Ashley Miller, Executive Director for the Chamber.  Miller worked diligently to coordinate efforts and was instrumental in bringing awareness to the need for funding.

What began as a restoration project and fundraising campaign to renovate the monument by the Turner County Young Farmers quickly turned to a more extensive rebuild after Hurricane Michael’s destruction.  “The Big Peanut was declared a state monument in the early 1990’s and the Young Farmers had begun a community service project to refurbish the Peanut,” explained Dennis Kendrick, Turner County Young Farmer Advisor. “But in ’18 when the hurricane came through, it expedited the process and the need to refurbish it.  We’ve been working since then to get funds to get this peanut monument restored and we’re looking forward to the money that AgGeorgia Farm Credit has donated going to good use.  It will go very far to secure getting this monument back up,” Kendrick said.

When the need for funds was brought to the attention of AgGeorgia, the Board of Directors voted unanimously to donate the funds needed.  “We are excited to be a part of the monument’s reconstruction,” said AgGeorgia’s CEO Rob Crain.  “Supporting our state’s number one industry, along with supporting this local community and its farmers, is an opportunity our organization couldn’t pass up.  We understand the significance of agriculture and the major economic impact it has for our state.  We are proud to be involved in the re-establishment of this monument.”

According to Kendrick, Metal Fabricator Cole Sercer expects to have the reconstruction completed in early 2023.  “We’ll be glad to have the monument back up and to have everyone celebrate with us,” Kendrick said. 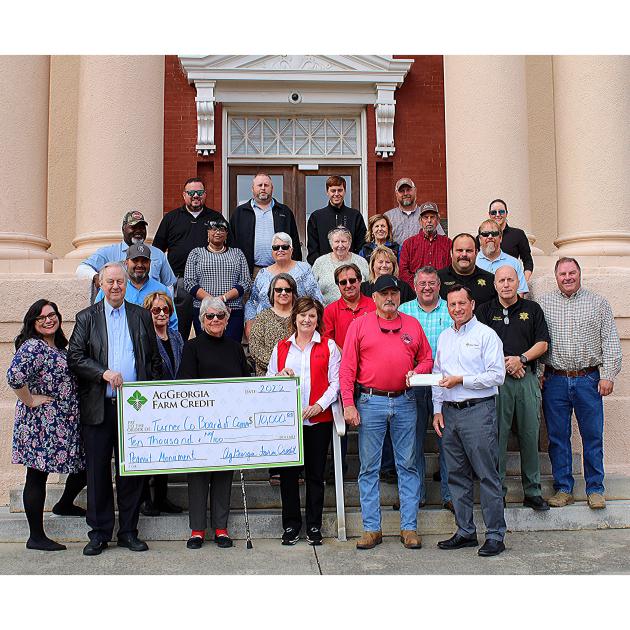