AgGeorgia Farm Credit’s Board of Directors is pleased to announce the appointment of Henry Clinton (Clint) Wortman, Jr. to the board.  Mr. Wortman will fill the unexpired term (through 12/31/2022) of Ronney S. Ledford of Dooly County, who represented AgGeorgia in this position for over 35 years before retiring from the board in February.  Mr. Wortman will be eligible to be elected by AgGeorgia’s member-borrowers later this year for another term.

“We are tremendously grateful for the leadership and wisdom that Mr. Ronney provided over his tenure as an Association Director,” said AgGeorgia Board Chairman Jack Bentley.  “With the departure of such an esteemed member of the ag community, it was important that we found a suitable replacement to represent our stockholders. As a farmer that is highly respected within both the Brooks County area and agriculture circles, Clint fits that bill.”

Mr. Wortman received a degree in Finance from Auburn University in 1990 and returned to the family farm.  A third generation farmer, his grandfather established a large dairy farm and formed Jackson & Wortman, LLC, with Clint’s father, Henry.  In 2002 they transitioned the farming entity to row crops of corn, cotton, peanuts and soybeans, in addition to pecans and beef cattle.

Mr. Wortman has been a member-borrower of AgGeorgia Farm Credit for over 15 years.  He is married to Jenay Parrish Wortman and together they have two children, Lance, a junior at Auburn University, and Jessie, a freshman at Auburn. 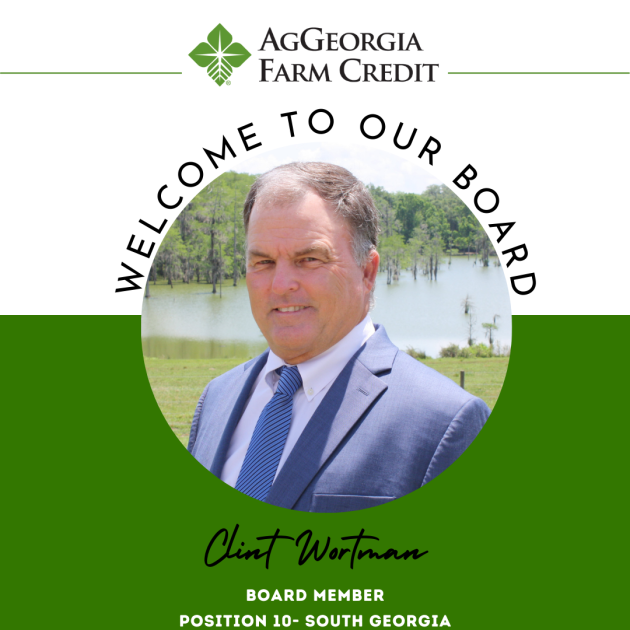